Snow Hill, Maryland, October 21, 2020 – Worcester County today unveiled a new place brand – Maryland’s Coast – designed to strengthen its reputation as a vibrant destination for new businesses, families, amateur sports events and vacationers. The simple, yet powerful, description differentiates Worcester from other regions in the state. Officials from the county’s Department of Recreation and Parks, Tourism and Economic Development introduced the unified marketing identity at a launch event attended by industry partners and elected officials at the Links at Lighthouse Sound in Bishopville.

Department Director Tom Perlozzo said the new place brand is the culmination of a six-month discovery and outreach process that engaged community and business leaders from throughout the county. “Every place, whether large or small, is challenged to answer one simple question: Why choose here?” Perlozzo said. “Maryland’s Coast embraces Worcester’s most recognized and distinguishing physical characteristic – The Atlantic – the only place in the state where ocean meets the land.” Next steps are underway, according to Melanie Pursel, county tourism director, to incorporate Maryland’s Coast in a variety of marketing platforms, including department websites, printed materials, trade show displays, outdoor signage and county vehicles. The Maryland’s Coast brand platform consists of a logo mark and accompanying tagline – Naturally Cool – that symbolize Worcester’s identity as a naturally beautiful, friendly and relaxing environment inspired by water. The discovery process was launched in late March with eight focus groups and multiple interviews conducted with 50 people representing diverse industries, interests and geographic areas from Bishopville to Pocomoke City. Due to COVID-19, plans for in-person discussions were shifted to live, video conversations. Additional insight was gained in April through a 10-question, online survey completed by 112 residents and business owners. Perlozzo said responses from the research were analyzed to discern commonly held beliefs, aspirations, personality traits and characteristics. That was followed by a competitive analysis to understand how other locations were positioned in the region.

The outreach findings, according to Pursel, revealed several distinct and diverse characteristics about Worcester County that are valued by its residents and visitors. These included natural beauty, relaxed lifestyle, close-knit communities, and attraction to the beaches, bays and many waterways. “We’re a place where you go from rural to resort in five minutes and farm, fish, golf and surf within, a five-mile radius,” she said. “You can enjoy coastal beaches, explore cypress forests, experience beach resort nightlife or find space for quiet retreat. Our citizens live, work and play in a vacation area with a small town feel and big town resources.” Four stakeholders spoke at the launch: Jere Johnson, media, marketing and promotions coordinator for Snow Hill; Scott Lenox, operator of Fish in OC and host of Hooked on OC television show; Kate Patton, executive director of the Lower Shore Land Trust; and Diana Purnell, Worcester County Commissioner and co-owner of Purnell Enterprises in Berlin. “The contributions and valuable insight gained from our stakeholders has led to early brand adoption as we work to generate awareness, interest and pride in Maryland’s Coast among all county residents and businesses,” Perlozzo said. The department worked with the Eastern Shore’s Choptank Communications, which led the discovery process and created and designed the Maryland’s Coast place brand. ###

The logo incorporates five shades of blue with the word Coast in a sweeping font. The tops of each letter appear as waves rolling toward land – a bold, flowing curve that extends from the coast to the state. The words Maryland and Worcester County are shown above and below the mark, anchoring Coast solidly between the two. 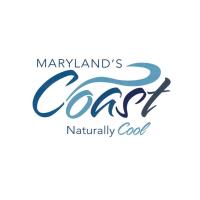